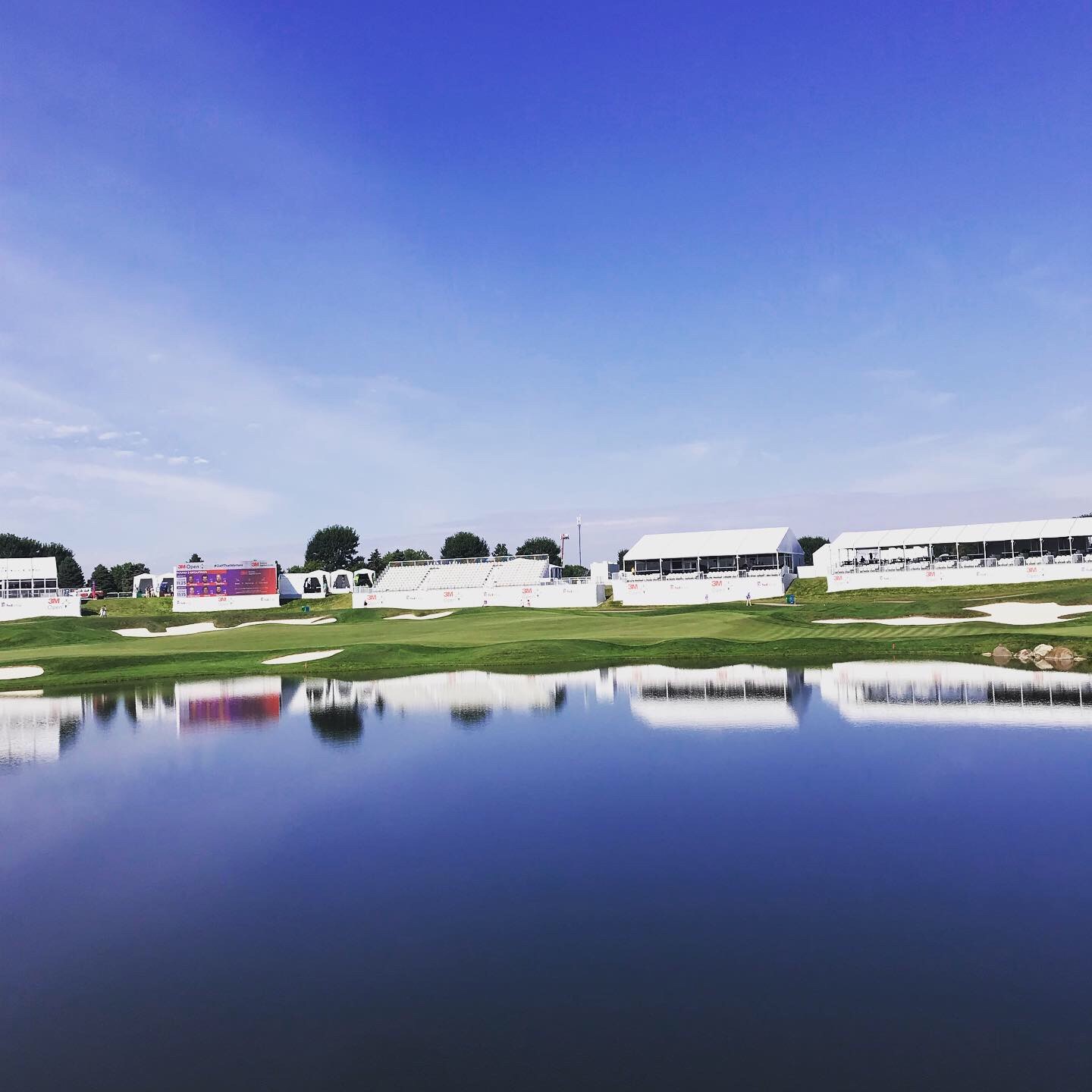 Scenes from inaugural 3M Open: Golf, thunder and a big dose of branding

For golf fans and science lovers, the 3M Open at the TPC Twin Cities in Blaine hit the right spots. Thursday was thee first day of the tournament, and it ran running smoothly — aside from storms that briefly forced fans from the course around midday. Daily attendance was still being calculated but will far exceed the 20,000 goal, according to Pro Links Sports CEO Hollis Cavner, who organized the event. Cavner said VIP and related hospitality tents sold out. The maximum course capacity is about 45,000 patrons.

“We had a great crowd here at eight o’clock this morning,” he said about Thursday’s crowd. “This golf course is on almost 300 acres. … There’s room everywhere for people. It’s not like going to the Ryder Cup where you can’t get up close and see.”

The tournament cost about $15 million; 2,000 people are working the event, from catering, security, transportation and guest services. There are also almost 2,000 volunteers helping out.

From the park-and-ride stations around the Anoka County-Blaine Airport to getting inside the grounds was taking about 10 minutes, fans said.

Maplewood-based 3M Co. (NYSE: MMM), in keeping with its status as the tournament’s top sponsor, had a presence almost everywhere one looked. Officials declined to provide figures on what the company spent, but said the tournament is the company’s largest sports sponsorship. 3M has roughly $32 billion in revenue and sees the tournament as a way to treat its customers from around the globe and show the world it makes more than Post-It Notes, according to Senior Vice President of Corporate Affairs Denise Rutherford.

“This is our big event,” she said. “We have customers from all over the globe here.”

An overhead view of some of 3M Co.’s presence at the 3M Open event this week. The company installed a tent roof that reflects heat away from the ground, keeping the tent cool without electricity.

3M set up a public tent near the 18th green. The roof has a film on it made by the company that refracts heat from the sun, keeping air conditioning costs down. Another 3M attraction is a swing set partially held together by an adhesive the company makes. Roughly 3 grams of the super glue can hold 10,000 pounds, Rutherford said.

There are other companies at the tournament, but they’re much harder to spot by the average fan. A Business Journal reporter saw virtually no other advertising from other companies. Media-based Polaris Industries Inc. had one hospitality tent for military personnel, but otherwise most signage was in the back of corporate tents — making sure television cameras only pick up 3M logos. (Another exception was FedEx Corp., the title sponsor for the PGA Cup award.)

What’s next for years to come

In prior years, Cavner and his team held a senior PGA Tour event at the golf course that was also sponsored by 3M. This is the first year with a PGA tournament featuring the younger, more popular players, and officials were already thinking about how to make it better for next year.

Cavner said he’d like to place more food and beverage stations throughout the course. The vast majority of beverage and dinning options were near the 18th green and fairway or by the course’s clubhouse. For future years if fans want to follow a golfer through all 18 holes, they’ll have more options along the way.

Rutherford added 3M will have more displays in years to come featuring more of the company’s product line and research.